Mimosa Pale is a finnish artist working in the field of sculpture and performance art. The elements of motion and transformation are in the heart of her work. She makes interventions in public space, plays the musical saw in freak shows and sees collaboration as an importat factor of making art. Pale is currently (2018-2021) a scholar in the Antonie-Leins Artist House in Southern Germany. 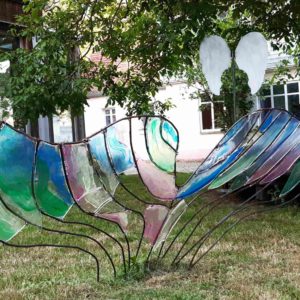 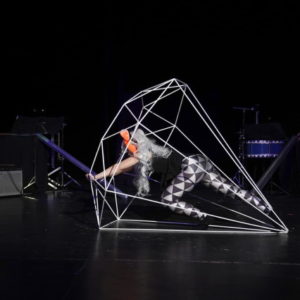 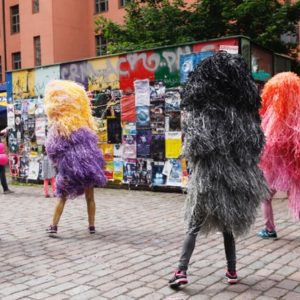 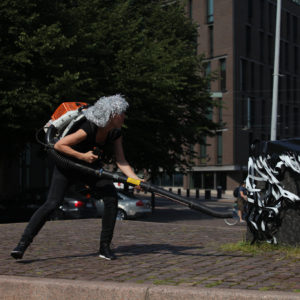 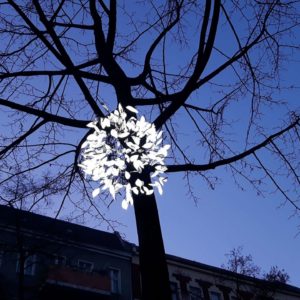 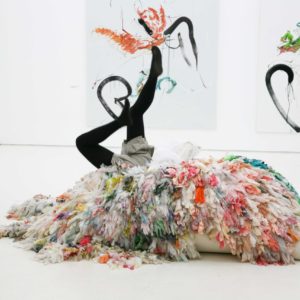 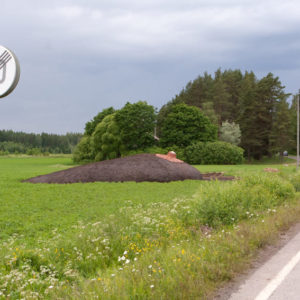 Taking part in the exhibition in FORUM BOX , Helsinki, Finland 19.8.-12.9.2021, curated by Minna Haukka, a collaboration with the Feminist Library in London.

Proud to be part of Bodyleaks, a Festival for Female Empowerment & Interconnection 24.04. – 08.05.21 in Mannheim, Germany more

“Turn it upside down and it looks great.” —Mimosa Pale

Mimosa Pale is a Finnish artist and musician born in 1980 who grew up in Pori, Finland. As a teenager, she studied action painting in Salzburg, which kickstarted her passion for performance art. She continued to study art at the University of Central England in Birmingham, the École nationale supérieure des Beaux-Arts in Paris and graduated with a Master’s in Fine Art at the Academy of Fine Arts in Helsinki, with a focus on sculpture. Today, she bridges sculpture and performance art in comical, yet unexpected ways.

Primarily inspired by carnivals, masquerade, side shows and jazz, Pale arms the silly with the spectacular; and brings a playful approach to otherwise ordinary materials. Her approach is what she calls “a social approach to art,” in that she believes art is for everyone, with a focus on bridging disciplines.

Pale moved to Berlin in 2008, where she ran her own “poor man’s haute couture” hat shop called Himo, in the district of Neukölln. It became a hub of concerts, exhibitions and performances. Over the following years, Pale became known as a leading figure in the city’s underground art movement, where she created performances that have combined millinery with recycling used materials and audience-as-performer in what she calls “street life performance.”

Using materials that move, like fringes, is at the heart of her playful artworks. She made a piece entitled Wandering Shocks, where a group of performers wearing costumes made of rainbow-hued fringes performed at the Berlin Circus Festival in 2017, while for another, she has adhered plastic fringes to a public monument for Blow, which she blew with a leaf blower as part of the Streetlevel Festival in Helsinki in 2015.

As a musician, Pale performs with the musical saw, a handsaw that is played with a bow, which she incorporates into her performances. Between the years of 2008 and 20__, she collaborated with the “Electric Sideshow,” a variety show in Berlin. As a musician, she has also collaborated with bands like Emma Award-winning jazz band Dalindeo and Finnish dance orchestra, Vallilan Tango.

The artist has a to break tradition by showing outside of traditional art gallery, stage and theatre venues. “My work has some theatrical elements, but they are used rather in contrast to other surrounding elements and expectations,” says Pale.

In 2018, she created an artwork called Foliage, a “reflecting” [glow-in-the-dark/made of reflective materials?] coat that was part of a larger installation with her art collective Wild Angelicas; Maria Duncker, Anne Hiekkaranta and Niina Lehtonen Braun, which included a fountain and backdrop for poetry performances in Berlin.

In 2019, Pale performed “How to Become a Diamond” at Opean 6, Einstein Kultur in Munich. While onstage with a life-sized, skeletal diamond sculpture, she performed onstage under a set of rotating colored lights.